Dreams can come true – in the Spanish countryside

Country life can do you a world of good… if you can hack it. Take inspiration from the Japanese sushi chefs who set up in the Pyrenees, the blacksmith YouTuber who repopulated a village with medieval techniques and the woman who swapped a milk factory for 600 sheep

There was a moment in spring 2020 when Covid brought Spain to a standstill and for 45 days when you opened your window in Madrid or Barcelona or Valencia, what you heard wasn’t the ceaseless roar and clatter of traffic, but birdsong. The air smelled fresh and at night you could see the stars.

And people thought, “Wow! this is nice!” and it set them thinking not just about how the city might be improved, but also that maybe they didn’t need to live there at all.

Over the past 80 years a steady flow of people have abandoned the countryside in exchange for life in the city. Around 55% of us live in urban areas, compared to 30% in 1950.  Women, in particular, have fled to the cities in search of work and to escape what for many was a suffocating life in the country.

As a result, some parts of Spain and Japan have a rural population density lower than Amazonia, while in Sweden the percentage of people living in the countryside fell from 54% to 21% between 1925-65.

If there’s one thing the pandemic has shown us it’s that millions of people can do their jobs perfectly well sitting on a Pacific atoll or half way up a mountain, so long as they have a functioning internet connection.

This has led to new efforts by countries such as Japan and Spain to woo people back to the land and villages their parents and grandparents left behind.

In Japan, where there are an estimated eight million akiya (empty homes), regional governments have been enticing city-dwellers back to the country with offers of houses for as little as $500. In Okutama, west of Tokyo, they’re even giving them away.

Cities like Tochigi and Nagano have set up akiya banks, databases of vacant or abandoned homes, and in parts of Hokkaido, authorities reported an 11% fall in empty homes when people were offered cash incentives to buy and to pay for child care.

In Spain, rural depopulation has become a political issue and the government is planning to offer financial incentives for resettlement. However, as many villages are without medical services and schools, and sometimes even without a bar, cash handouts may not be sufficient to tempt people back.

“Many people have gone to live in villages during the pandemic because they can work remotely but if we can’t offer good services, they’ll go back to the city,” said Linda Díaz, president of the Spanish Depopulation Association.

In addition to legislation, others are taking more imaginative measures. A group of around 30 Spanish towns and villages has set up a network to attract digital nomads. The National Network of Welcoming Villages for Remote Workers offers nomads a place to stay and a host to help them integrate in the village.

A TV reality show has been launched where contestants compete to launch a business idea in a Spanish village with fewer than 5,000 inhabitants. Meanwhile, in Galicia in northwest Spain, where there are over 1,000 abandoned villages, things got so bad that in 2018 Gwyneth Paltrow offered a Galician village for sale in her Christmas shopping catalogue. At $172,910 the village cost the same as a box of 2,500 of Paltrow’s famous vaginal eggs.

The enforced isolation of the pandemic has made many people rethink their lives and in particular to consider whether the stress and expense of urban living is really worth it.

Mountain sushi with no commute

In December 2020 Japanese chef Kenya Nakamura and his Catalan partner Anna Perayre closed Wagokoro, the restaurant they’d run for 12 years in Barcelona, and moved it to the ground floor of Perayre’s mother’s house in Gerri de la Sal, a village of 131 souls high up in the Pyrenees. And Wagokoro Pirineu was born.

The two met in Berlin and lived in Japan for four years before setting up Wagokoro. Nakamura, who is from Kyushu in southern Japan, describes himself as a traditional Japanese chef who specialises in tasting menus of 9-15 dishes.

“We wanted to be closer to nature and escape the stress of the city, the noise, pollution, the gentrification and the way the city was being developed in the interests of tourists and not the people who live there,” says Perayre. “You get to the point where it doesn’t feel like your city any more. I’d been wanting to leave for years but it’s not easy to move a restaurant to another place.”

“My family did everything possible to stop us moving here,” she says. “They were afraid it wouldn’t work out. We opened in December 2020 and within ten days the municipal lockdown was imposed. As there are only around 100 inhabitants that made things pretty difficult. But when the lockdown area was extended people started coming, maybe out of curiosity, but they came back.”

The restaurant only opens at lunchtime and there is only space for 12-14 covers.

“What I love is when I look out the window it’s all green, there’s a river right next to us. There are no cars, no one shouting, no stress. In Barcelona you spend a lot of time travelling to work, but here we live upstairs and we can get to work in 30 seconds.” 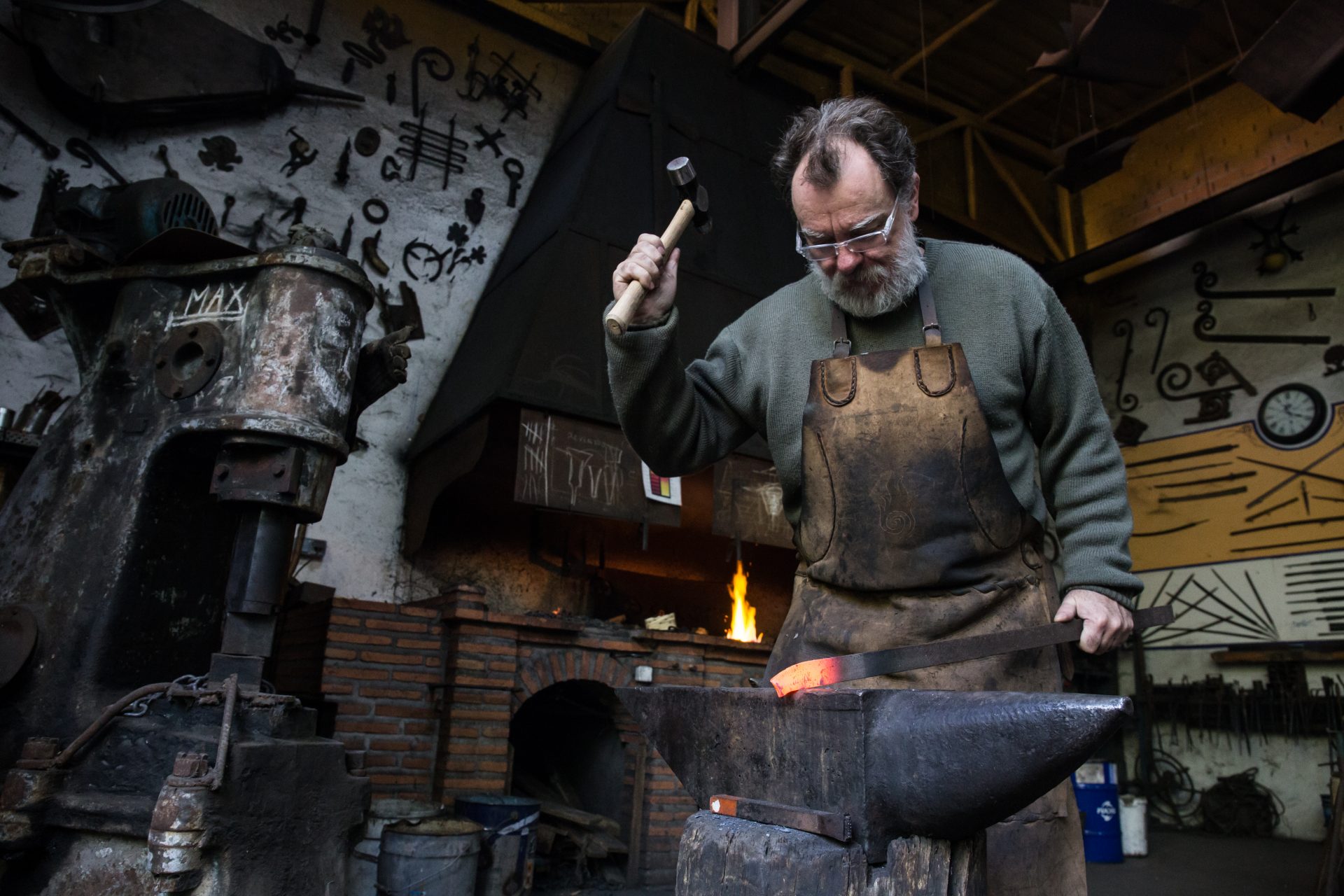 Blacksmith skills to pay the bills

While sushi in the Pyrenees is exotic, setting up shop as a blacksmith in a village in Castilla-La Mancha is rather more old school. Ramón Recuero says he’s been fascinated by smithing since childhood and set about learning traditional techniques from the few surviving blacksmiths in his hometown of Ciudad Real and Toledo.

When he needed a place for his workshop he moved to the abandoned village of San Antonio, near Toledo.

“I looked for an abandoned village because I thought it would be more affordable and more peaceful,” Recuero says. “There was only one family in San Antonio and they were planning to leave. Now there are 25 or 27 of us living here. The first to come was someone from Toledo who I met at an artisanal fair. The second was a ceramicist. Then a carpenter and then people began renting houses, people from the region, from Cuba, and then the children of two or three of the families that abandoned the village came back to live here with their children.”

When Spain’s economic crisis hit in 2008 he found himself out of work. He set up a YouTube channel, not for money but so that he could pass on the techniques he’d learnt. He soon had 100,000 followers, some of whom asked if he could give them practical lessons, so he set up a blacksmiths school in the village.

“I started the school because of the demand,” says Recuero. “Some courses are just for the weekend, to learn a particular technique, others are for a week or up to six weeks. Now I’m running a workshop with ten students who may be here as long as two years. They learn everything they need to know to open their own business.”

Recuero says the school is in talks with a village in Japan. “We’ve been talking to them about how people can leave Tokyo to live in the country. We’re giving courses in smithing in a village in Japan so they have a trade.”

In 2019 Laura Serrano Isla called time on 17 years working in a milk processing plant in the town of Aranda de Duero to join her husband on the farm, where she now tends a flock of 600 sheep and manages sales.

The downside: You’ll miss your friends and, unless you’re a fan of livestock fairs, you’ll have to make your own entertainment.

“It’s been hard to adjust. It’s hard, the days are long, but I like it,” she says. “What I like most is the joy and freedom. I’m in the countryside, not stuck inside four walls. Every day there’s something new, not like in the factory where everything’s very monotonous, doing the same thing every day for eight hours.”

The only thing she misses is working with other people. “I miss my workmates, we were a great team.”

Whether it’s just a fad that gained traction during the pandemic remains to be seen, but Recuero says there’s definitely a trend of people wanting to move to the country. The question is to do what? He cautions against those with simplistic, bucolic fantasies.

“People come with the idea that they’re going to grow organic vegetables but that won’t work,” he says. “They need a skill for which there’s some demand, like web design. Then they can survive without a problem.”

Rural-curious? In a world where we have more and more lifestyle options and new spunky alternatives to traditional concepts of ‘work’, it still takes balls to up sticks and move to the countryside. It might not be your idea of utopia, but this monumental cultural shift and movement of people helps regenerate the land, villages and economy. Stuck for ideas of what you will do once there? Embrace the transformative power of radical self-reliance – and go for it.

Stephen Burgen is a writer and freelance journalist based in Barcelona who for the past 20 years has contributed hundreds of articles on Spain for the Guardian, Observer, Times, Financial Times and Sunday Times.