On the trail of Lisbon’s faithful friend – salted cod

Traditional salt cod has been deeply rooted in Portuguese eating habits for the last five centuries, but is it near its sell-by date? Fiona Dunlop meets celebrity chef Vitor Sobral, and explores Lisbon’s reverence for cod as a way of life

Scour the marble counters at Lisbon’s food markets, and you will find piles of sea bass, swordfish, sardines, mackerel, eel, turbot, sole, red mullet, and a host of other gorgeous piscean splendours – slippery, bright-eyed, and straight from the Atlantic. But cod?

Given the coastline, it’s no surprise that the Portuguese are Europe’s biggest consumers of fish and number three in the world. But look for fresh cod, bacalhau fresco, and you won’t find it. No sign. 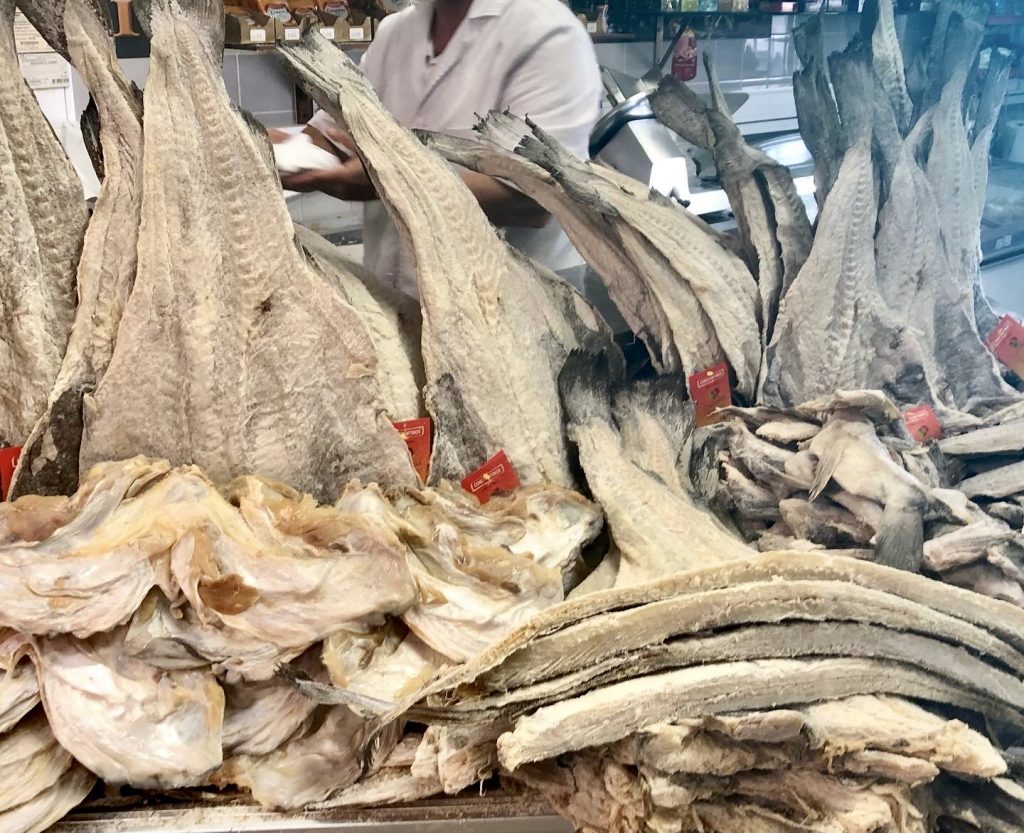 Because in Lisbon, as elsewhere in Portugal, bacalhau comes stiff as a board: dry, white, salty, an elongated triangular shape that is priced according to origin and weight in specialist groceries.

So what’s behind this conundrum?

There is a visible obsession. Images of that dried, butterflied fish pop up everywhere – on hand painted tiles, on decorative cans, beautifying a silk scarf or shaping a wall-clock in an aging restaurant. Not surprisingly, the clock time is wrong – even bacalhau batteries die. 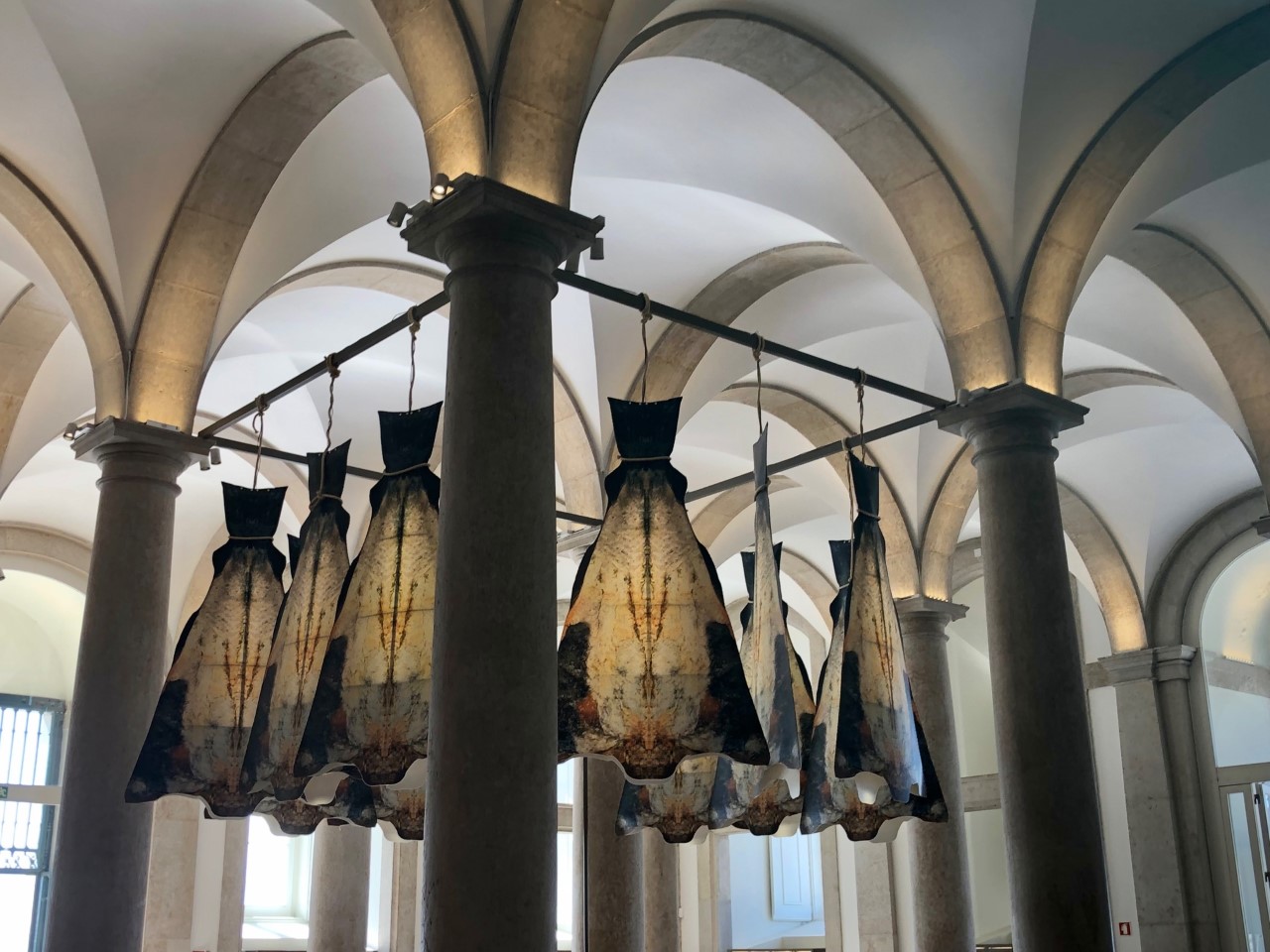 Most striking of all is a cluster of ghostly (imitation) salt-cod seemingly drying.

or part of the national identity?

The cluster is suspended beneath the arches of the cool new Interpretative Centre of the History of Cod, smack on the grandiose Praça do Comercio, Lisbon’s central square fronting the river. Here, after watching yachts skim along the Tagus, you duck inside to enter a succession of darkened halls to penetrate the odyssey that once led Portuguese fishermen to the freezing seas off Newfoundland. The result of these forays fuelled their glorious era of world discovery. The display is factual, surreal, conceptual – and totally compelling.

At one point, activated by a sensor,

a door slides eerily open and the temperature plummets,

Elsewhere, portholes frame shaky black and white footage of the intrepid men who slid off the luggers to head out alone in precarious skiffs to line-fish for up to ten hours at a stretch. Work didn’t stop there as back on the mother-ship they then had to cut and salt the fish. Drying took place on their return to Portugal in the wind and sun.

Today things have changed – the fish are caught in nets off northern Norway and Iceland where cod are still plentiful, stirring hot debate over which country produces the best salt cod, and drying is usually by mechanical means. Perhaps climate change will inspire a return to sun-drying but also, sadly, a reduction in cod numbers.

The story of Portuguese salt cod may go back six centuries, yet bacalhau remains such an addiction that at least one dish features on practically every menu in town, from backstreet tascarías to Michelin-star restaurants. On café counters, bolinhos de bacalhau (cod croquettes) extend the temptation. One good reason for its popularity is that, being ferociously Catholic, the Portuguese once eschewed meat for about one third of the year. Enter bacalhau, the poor man’s fish: cheap and easily transportable, it could keep for up to a year and took pride of place on Christmas Eve dinner-tables, as it does today.

Another reason for its status is that fibrous salt cod holds its own in the kitchen due to the unparalleled shift in texture that comes from salting then desalting multiple times. Its versatility wins hands down over the fresh product too, whether cooked in stews, baked or raw, cut or torn, tossed through a salad or integrated into a sauce. Allegedly, there are 1001 ways to use it.

A few years ago a single-minded celebrity chef, Vitor Sobral, produced an encyclopaedic tome of 500 salt cod recipes in which the finer points include quotes from fado songs and from writers such as Cervantes.

Here’s a chef who not only reveres Portuguese food but also likes corners. Nearly all his ten outlets incorporate the word ‘esquina’ (corner), from Brazil to the far-flung Azores. Dotted around Lisbon other of his eateries specialise in pastries, seafood or petiscos (Portuguese tapas). He makes frequent appearances on Portuguese TV when not travelling to Portugal’s former colonies (Goa, Macau, Brazil, Mozambique) to investigate cooking fusions. Hyperactive Sobral churns out books too, though his award-winning As Minhas Receitas de Bacalhau (‘My Bacalhau Recipes’ – only available in Portuguese) is by far his bestseller.

Over breakfast at his Padraría do Esquina, a bakery-café that serves divine breads and pastries that is just one of Sobral’s establishments, this 54-year-old bacalhau-prophet enthuses over its benefits. “Fresh cod is good, but it’s far better when salted. We have at least 30 other fresh fish that have greater flavour. And it’s a good deal too – as once soaked, salt cod nearly doubles in volume,” he says.

For Sobral, the nutritional aspect is key too. “As bacalhau comes from very cold water, there is no fat, just collagen, and it has plenty of Omega 3 – more than fresh cod.”

Cod also contains Vitamins B12, C, D, iron and sodium – so not to be sniffed at. As for the debate over which source of cod is best, for Sobral, Norway wins hands down.

“They are very rigorous in terms of their fishing quotas, so don’t overfish,” he adds. “I join fishermen there in the summer, in the far north where the water is still so cold that you get hyperthermia if you swim for more than a few minutes! And Norway’s fjords abound in small fish around the rocks which the cod feed on, so improving the flavour. They don’t have this in Iceland.”

Board of cod, board of life

But hang on. Down in central Baixa, at Lisbon’s most venerable grocery, Manteigaría Silva, all their bacalhau comes from Iceland. To get to the shop, you walk across Rossio’s vast esplanade of calçadas (decorative cobbles – a Lisbon trademark), here in a design of dizzying waves – rather appropriate for this cod-trail.

When questioned, the cod vendor (another Vitor) explains: “In Norway there’s too much catch, they cure too fast and sometimes it’s even frozen. In Iceland the water is colder, so the cod is better, and they salt-cure immediately before shipping it to Portugal for drying.” So, as in many things in life, there are always two sides to a story.  The impressive stacks of wavy cod ‘boards’ command high prices, peaking here at €104 for a 3.6kg vintage salt cod, cured for 20 months – clearly the crème de la crème.

And the clientele? “The older generation still buy it, but younger people don’t so much.”  Hardly surprising when preparation involves soaking and rinsing repeatedly for up to 48 hours to desalinate before cooking even starts. It’s a clear labour of love.

So will it fade away?

Where to eat bacalhau

Unlikely, as even if not cooking it themselves, Lisbonites still indulge to the full at restaurants. The offerings proliferate – from the mind-boggling menu of 20 different cod dishes at A Casa do Bacalhau to Michelin star Henrique Sá Pessoa’s Alma, where “cobblestreet” salted cod with onion purée, egg yolk and parsley is a fixture. In chef José Avillez’ gastro-empire in Chiado, at ultra-hip Cantinho you can sample flaked cod with corn bread, fried egg and his signature ‘exploding’ olives.

But the most common dish of all, found in numerous neighbourhood restaurants, is the classic Bacalhau à Brás, in which cod strips fried with onions and potatoes are scrambled in egg: simple, creamy, sustaining stuff.

For chef Vitor Sobral, this is his favourite cod dish: “I cook it often at home as the children love it”. Naturally, he offers an elegant version at his original restaurant, Tasca da Esquina, in the art nouveau district of Campo de Ourique – his personal gastronomic kingdom.

Down by the thronging nocturnal hub of Caïs do Sodré, at bohemian Clube do Bacalhau, the setting could not be more different. Converted from an old warehouse, the floors are of stone, the soaring ceilings of rafters and brick, and most furniture is re- or upcycled. Old black and white photos of fishermen adorn the walls and an original cod-fishing dinghy balances between two beams. Here bacalhau takes off into innovative (and affordable) realms, starting with a sumptuous tartare incorporating capers, red onion and coriander which, once doused in olive oil, is flambéd theatrically at table – sheer heaven. A fat, glistening loin of salt cod with cornbread crust is deliciously silky but before that, lo and behold, a ceviche with papaya and red onion turns out to be made with fresh cod.

A surprise – but certainly not a sign that Lisbon’s traditional salt cod, dubbed fiel amigo (faithful friend), is losing its allure. If it has survived six centuries already, the sell-by date is still far off. And presentation evolves too: Lisbon’s latest craze is codfish cake oozing an unctuous sheep’s cheese: an addictive flavour and calorie bomb. Fast-food Lisbon style, with bacalhau of course.

Fiona Dunlop stayed in the heart of nocturnal Lisbon at LX Boutique Hotel, Caïs do Sodré, from €135pn.

The story of salt cod is intricately and intriguingly woven into the Portuguese identity. Although recent decades have seen cod stocks depleted in the Western Atlantic and the North Sea, they remain buoyant in the northeast Arctic – northern Norway, and off Iceland – the main sources of Portugal’s obsession.

Sustainability does not end there, as the extended shelf life of salt cod means there need be no food waste. And, in the six centuries of taking pride of place on Portuguese dinner-tables, bacalhau has always been democratic, loved by rich and poor alike.

Author of four travel-cookbooks on Spain, Mexico and North Africa, as well as a dozen or so travel-guides to the tropics, from Indonesia to Costa Rica, Fiona Dunlop has done some determined globe-trotting over the last three decades. Her obsession with food started during an 18-year sojourn in Paris, now replaced by investigating the ethnic offerings of her north London hood or the top tapas bars near her retreat in the olive-groves of Andalucia. Lisbon is easily one of her favourite cities – with or without bacalhau. Follow @ffdunlop and @andaluzfoodandtravel.