The imperfect pursuit of a climate positive album

WTF is a carbon neutral album? The Australian metalcore band gave it a red hot go – and this is what they learned

Like many people giving personal accountability in the climate crisis deep thought, Jake Taylor found himself at an impasse. His band, the successful Byron Bay outfit In Hearts Wake, had, over the course of 15 years built a dedicated following. Enough to serve their devotees with regular new music, and satisfy fans’ appetite for another international tour.

Yet, during a break in 2019, the group didn’t need to look far to see a world on fire (quite literally in the case of the bushfires that harmed 3 billion animals in Australia). 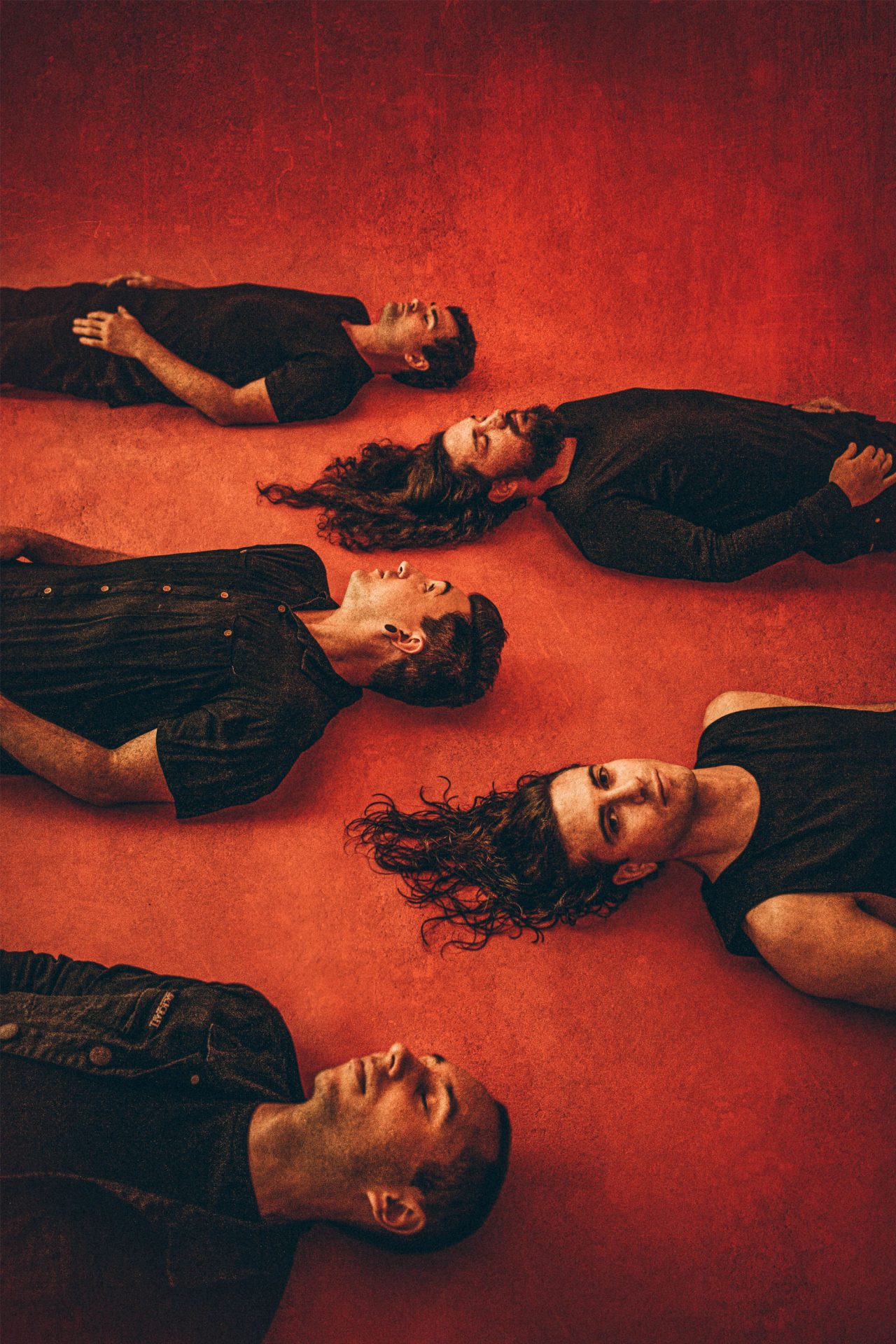 But they also saw action.

which took place across the world.

While the band had an established “eco” reputation – encouraging followers to participate in beach cleanups and inviting environmental organisations on tour – their sense of duty to the planet had continued to build.

Understandably, this threw up all sorts of existential questions about accountability and their own project: can being in a band ever be financially viable and also sustainable? Isn’t just quitting the best thing for the environment?

They committed to keep going. But somehow be more constructive. Keep trying. The outcome of which was the group’s attempt to make a new album – Kaliyuga, released in 2020 – that was climate positive, the process of which is captured in the engrossing new documentary Green Is The New Black.

“Technically, it’s a carbon offset album,” he clarifies. “But obviously we can’t just have offset records – we have to go further.” The process wasn’t easy since there was no real ‘greenprint’ for doing this. But as Taylor says, “we gave it a red hot go and learned a lot.”

There was no real ‘greenprint’ for doing this. We gave it a red hot go and learned a lot.

“We wanted to look into what our footprint was, and what we could do to neutralise it – and then some,” he notes. “That was the intention. And it was a research process – asking the question… What is the environmental impact of making a record?”

5 steps in the right direction

We asked the band how they did it – and for some tips on what the music industry can do to head in the right direction. Because everything helps.

“It wasn’t one slap-over-your-head kind of momen for In Hearts Wake to get to this point. We’d already been taking steps towards being more aware of what we were doing environmentally.

We’ve always been keen to acknowledge things. Like, the most sustainable way to tour is to not tour at all – that’s the existential question here. I think a lot of people feel paralysed by that realisation, and then just go, ‘I’m not gonna do anything at all. I’m just gonna keep doing what I’m doing, because everyone else is doing that.’ The whole climate situation can feel like something you can’t finish or solve.

When faced with that conundrum, for us, it was like, let’s give ourselves permission to not have to solve this, but to do our best. That allowed us to be a bit kinder. Part of that is learning from where you fell – if you don’t have those moments then you wouldn’t be learning, and neither would anyone else. In the past, the big realization moments were like the stage production – I think that was the big ignorant thing we were doing.

2
Get yourself a decent ‘Earth Accountant’

“We set the intent on what we were going to create. Then quantify one’s footprint, I think that was our first practical step. We had to capture and quantify the data, so that we could measure. That’s where the journey started to find someone who could help us work out what that entails.

Turns out, that’s keeping a log of everything. Things like using power readers. Keep all your receipts.

An “Earth Accountant” is also known as a carbon consultant or carbon accountant. They’re like a tax accountant – they help you dive in and quantify and calculate your footprint. We named ours an earth accountant because it’s way cooler. Her name was Grace Gallagher.

She helped us with setting the boundary. The boundaries are the areas in which we emit. It was a bit like working with a clothing company or something – we still use power and water etc – but that’s where we had the conversation about this being new ground. Bands aren’t really doing this, so together we had to work out what to do.

3
Count every kWh during the creation

“I was keeping all the numbers on my phone – a digital logbook with the figures covering things like power and kilometres of travel. It’s not a perfect process, but it’s the best we have in terms of becoming aware of what’s happening.

We have readers on all the mains power that was feeding the studio, and therefore all our gear from laptops to racks and lamps. We were running an eight hour work day. Over the course of two weeks it was interesting, each day the average power consumption didn’t fluctuate that much.

When it came to food and making a cup of tea and things like that. We said like three square meals, and a certain amount of groceries. Of course that was all helping power the record, too. There’s actually a formula the carbon consultant uses to help calculate that, and adding it all to the total. Logging that stuff is a reminder of the general rule to try and eat and shop locally – so it’s not like you’re driving all over town to buy some products that have come from overseas.

The final footprint? I believe it was 26.37 tonnes of CO2 from memory. I think that sounds quite heavy! Working with the accountant… when you open up the pie chart [of the carbon output from the making of the album] flights were like 16 tonnes. That was just five guys in economy on a flight going from Australia to America and back.

I think, again, although we love our olives from Italy, this is telling us we need to actually invest more of our time and forward thinking to be able to do things locally. We’ve been too dependent perhaps on the other side of the world for a lot of what we do everywhere in life.

“I think the word should be ‘bold’. Yeah, not demanding, but bold, in the types of conversation we had with the extended network that we work with, because there were certain things we didn’t want to do, particularly around the packing of the album and plastic.

The conversation that comes up is like, ‘hey, we really want to do this thing, because it feels like the right thing to do’. Because we’re an “eco band” or whatever I think there can be a bit of ‘oh, here we go’, but generally this is the stuff we’re all going to have to do in five years anyway so let’s just do it now. That’s how we all came to the table, at least with the people we work with anyway.

There were some things with the retail stores going on – they weren’t willing to stock the record without plastic. They just said no because they can get damaged, dirty or fall out. Who knows? Maybe it’s too much risk, too much liability, they don’t want to deal with it.

Anyway, these were the types of conversations we were having about doing things differently. As long as the conversation isn’t heated, and it’s not coming from an aggressive or attacking way, just saying ‘okay, this is what we’d like to do’ – having it as a question, rather than a demand. People are often willing.

5
Give back to the environment

“When you have 27 tonnes of carbon and you need to offset it on a market – you can’t just go in your backyard and just add up a bunch of trees and then justify that to the body that approves this stuff.

We worked with a project in the Yarra Yarra Biodiversity Corridor, which is in Western Australia.

This project had all these amazing eco benefits. The first nations people had reclaimed the farmland and put in all kinds of trees and shrubbery.

On release day, we got our friends and family together and planted these trees in this local area. The whole idea of doing this – ending with planting the trees was a nice cyclical process and felt really right.

At the moment this approach to making an album is obviously going to be a choice, but, I think, in the future, anyone with the luxury, who is a big artist, if you don’t have a carbon calculation, maybe their fans will be like ‘come on, man, you can be leading the way here’. I hope that’s the done thing.

Given our rapid global heating it’s ironic that In Hearts Wake describe their environmental endeavours as “giving it a red-hot go”, but that’s what they do. And while capturing the carbon footprint of their album wasn’t perfect, they learned a lot. The very fact they share their learnings/mistakes speaks volumes for a band who make loud music and an even louder noise about music’s role in the climate crisis.

They’ve created a dedicated site for their Green Is The New Black documentary, and released the soundtrack to the movie on 5 August 2022.

Greg Cochrane is a journalist, podcaster and content maker – mostly found writing and talking about the colliding worlds of climate action and popular culture. Formerly of BBC Radio 1 and the digital editor at NME, he once proclaimed The Kooks to be better than Arctic Monkeys. But don’t hold that against him – give his music/climate podcast Sounds Like A Plan a spin, and follow his scattered recommendations at @Gregcochrane