Cool ideas for a hot planet

Inside the nonprofit that turned festival activism into an art form 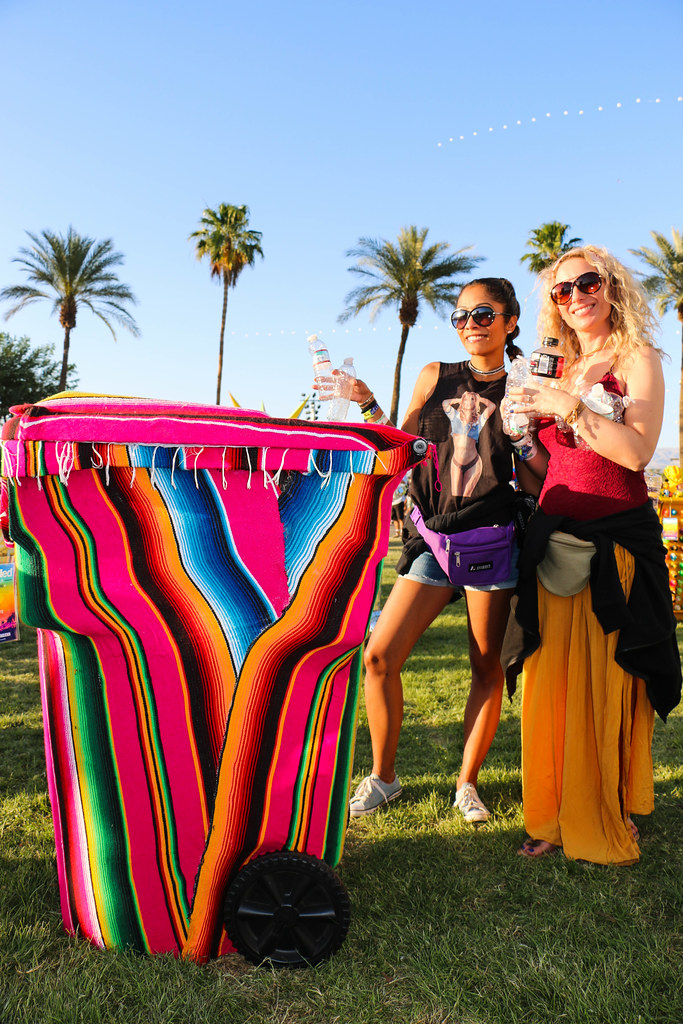 From 20 years ago, I think about all these festival kids that grew up and hopefully used that point of interaction with us as a launching pad to give back to the planet.

Music fans in California totally bugged out at the 2022 Desert Daze Music Festival in October. That’s because they ate bugs.

Meat the Beetles, an activation by Los Angeles-based nonprofit Global Inheritance, introduced a new era of Beetlemania at the popular rock fest as a way to call attention to more climate-friendly food sources.

“What we eat today and what we eat in the future will probably be drastically different due to climate change,” explains Global Inheritance founder Eric Ritz. “People won’t start eating June bugs tomorrow, but we want to create a conversation about eating habits that are less taxing on the environment. Eating insects is one way, of many, that gives us more control over our environmental impact.”

If eating arachnids sounds hard to stomach, Global Inheritance also produces an Oasis Water Bar that serves desalinate ocean water and (gulp) purified wastewater (pictured below at Coachella 2012). Ritz, who naturally plays a mean game of Truth or Dare, hopes these experiences help open minds. People who drink the water or eat the insects surprisingly find they like the taste, which can inspire many to reevaluate their preconceptions.

While these installations relate to food and hydration, Global Inheritance typically focuses on the arts as an interactive way to promote change, and many people know the work even if they didn’t know the organisation behind it. Since launching 20 years ago, Global Inheritance has had a presence at hundreds of music festivals, universities and sporting events around the world, including Kappa FuturFestival, X-Games, Lollapalooza, U.S. Open of Surfing, the Indianapolis 500 and the Super Bowl, as well as campus installations at major film and television studios like Paramount Pictures, Sony Pictures and Warner Media, among others.

Some of Global Inheritance’s most famous installations

Imagine having the chance to DJ at Coachella Music & Arts Festival. In 2007, the Energy Playground introduced a stage where attendees can DJ if their friends power the set through kinetic energy, which can include riding stationary bikes, playing on a swing set or running in human-sized hamster wheels. Global Inheritance’s kinetic energy programmes – which are a regular part of its annual appearance at Coachella – inspired a number of festivals and bands, including Coldplay, who adopted fan-powered energy bikes to help offset their tours’ carbon footprint.

Another viral hit is TRASHed: Art of Recycling that asks artists to redesign recycling bins as original works of art. More than 1,500 artists created bin art since the programme’s inception in 2004, including a Katy Perry “left shark” bin that the artist visited and shared on Instagram. Global Inheritance even collaborated with Games of Thrones on a White Walker bin for the HBO offices. Glastonbury Festival has since adopted the idea for its own recycling awareness initiatives.

Other installations include a 40-foot recyclable-eating T-Rex, solar-powered arcades and an artist-driven poster series that is generating the world’s largest library of issue-driven artwork.

Plastic Surgery, a newer programme interrupted by the pandemic, continues to make a difference on several artist tours and festivals. “Plastic Surgery is a mobile doctor’s office where the ‘doctors’ are all zero waste experts,” Ritz explains. “You fill out a patient form about your plastic habits, and the plastic surgeon gives you an analysis on where you can cut plastic out of your life. The doctor then provides a prescription that you take to the Plastic-Free Pharmacy to get items to help you reduce your plastic footprint. We produced a tour of all the film studios for the staff and talent, which inspired artists like Blond:ish and Destructo to receive ‘surgery’ and start cutting out plastic on their tours.”

Global Inheritance celebrates its 20th anniversary this year on 2 December 2022, but Ritz became active more than a decade earlier while attending university in Eugene, Oregon. In 1996, he put together his first benefit concert – featuring Blink-182, Unwritten Law and Sack Lunch (with pro surfer Rob Machado) – for ocean conservation. After college, he continued doing benefit concerts while working for promoter and manager Bill Silva, and his vision continued to grow working in youth marketing at JNCO and for the Truth campaign that educated U.S. teens about the risks of tobacco use.

“Truth was a big influence because the goal was not to preach, it was to present information through a platform where you weren’t shamed or guilted or told what to do,” he reflects. From there, he created Fashion Peace, the forerunner to Global Inheritance.

“The idea was that everyone’s a billboard, what you wear can represent the issues you care about,” Ritz says of his original nonprofit. “We worked with Adidas, Diesel, Nike, Levi’s, Fila – this is the early 2000s, mind you – redesigning clothes to focus on what you believe in.”

It was a Fashion Peace campaign that first connected him with Coachella. “We did Butthugger,” he continues, “which asked people to donate clothing that was too tight. Coachella didn’t want flyers outside, they wanted them all in one bag, and we said we’d help stuff the bags if they gave us some space in the bags for free. Done! We then pitched the idea of redesigning the festival recycling bins as an interactive art walk for festival attendees, and the relationship took off from there.”

During these early years, Ritz started doing more programmes outside the fashion world and realised the name Fashion Peace might be too limiting. He eventually did a charity auction called Global Inheritance and decided that would make a better name for the organisation.

“I saw the future in creating activations at large events, and that doesn’t always play into fashion,” he recalls. “Designing a wide range of experiences focused on empowering different audiences and subcultures had so much more potential in terms of reaching people. We wanted programmes that could be easily customised based on the type of audience engaged in the experience.”

As for the future, Ritz has been in talks with school systems and cities along with organisations like Soho House and festivals like All Points East and Primavera Sound, but he notes that all nonprofits need more volunteers and supporters to help carry out their programmes. Whether with Global Inheritance or other nonprofits, he says would-be volunteers should look for places where they can plug themselves in, whether that’s contributing art, design or invaluable production help. It should be as turnkey as possible.

“Most nonprofits are underfunded, overworked and just trying to keep things afloat while doing the good works they set themselves up to do,” he explains. “Find where you can support or play a role and be straight up with it. ‘Hey, I’m an artist, and I have a pretty good following. Do you think it’s a match?’”

How does Ritz characterise the “good works” he’s trying to do? Big picture, it’s about laying eggs that hopefully hatch into something bigger and more substantial with time.

“We see ourselves as that first date, that first kiss with activism,” Ritz concludes. “From 20 years ago, I think about all these festival kids that grew up and hopefully used that point of interaction with us as a launching pad to give back to the planet. We hopefully planted a lot of seeds in terms of people wanting to do more or take some ownership or leadership in how we’re treating each other and how we’re improving  the health of our planet.”

We see ourselves as that first kiss with activism.

Don’t guilt people into change. Inspire them. Global Inheritance does just that with shareable art-centric activations that spark creativity and inspire change.

David Jenison puts more stock in experiences than experience. That’s why, when he cut his teeth as a punk rock writer, he joined a band as it broke into the local mayor’s house to throw a party. “If the mayor has us arrested, he’ll never get reelected, so we’re fine,” said the guitarist with astute political savvy. From there, David explored chaotic creativity in food, travel, digital art, crypto and streetwear, from eating mezcal-soaked scorpions to spending a night in a Ukrainian jail to diving 600 metres underwater in a homemade submarine. The Los Angeles native now embraces life as a digital ronin who chases journeys over destinations, and side streets over highways. Follow him @DavidJenison.