Georgian wine, eggs and the miracle of life

Looking for the spiritual meaning of the kvevri

As I leave Tbilisi on my way to Kakheti, the Georgian capital’s peculiar urban mix of Soviet architectural memories and contemporary western influences swiftly progresses into a concatenation of dramatic mountainous landscapes.

Tortuous serpentine roads and the libertine nature of Georgian driving call for a front seat and plenty of scopolamine, yet the views over the silky, textured quality of the Gombori range are certainly well worth a little motion sickness.

And so is the thrill of the looming proximity of Georgia’s problematic northern neighbours. 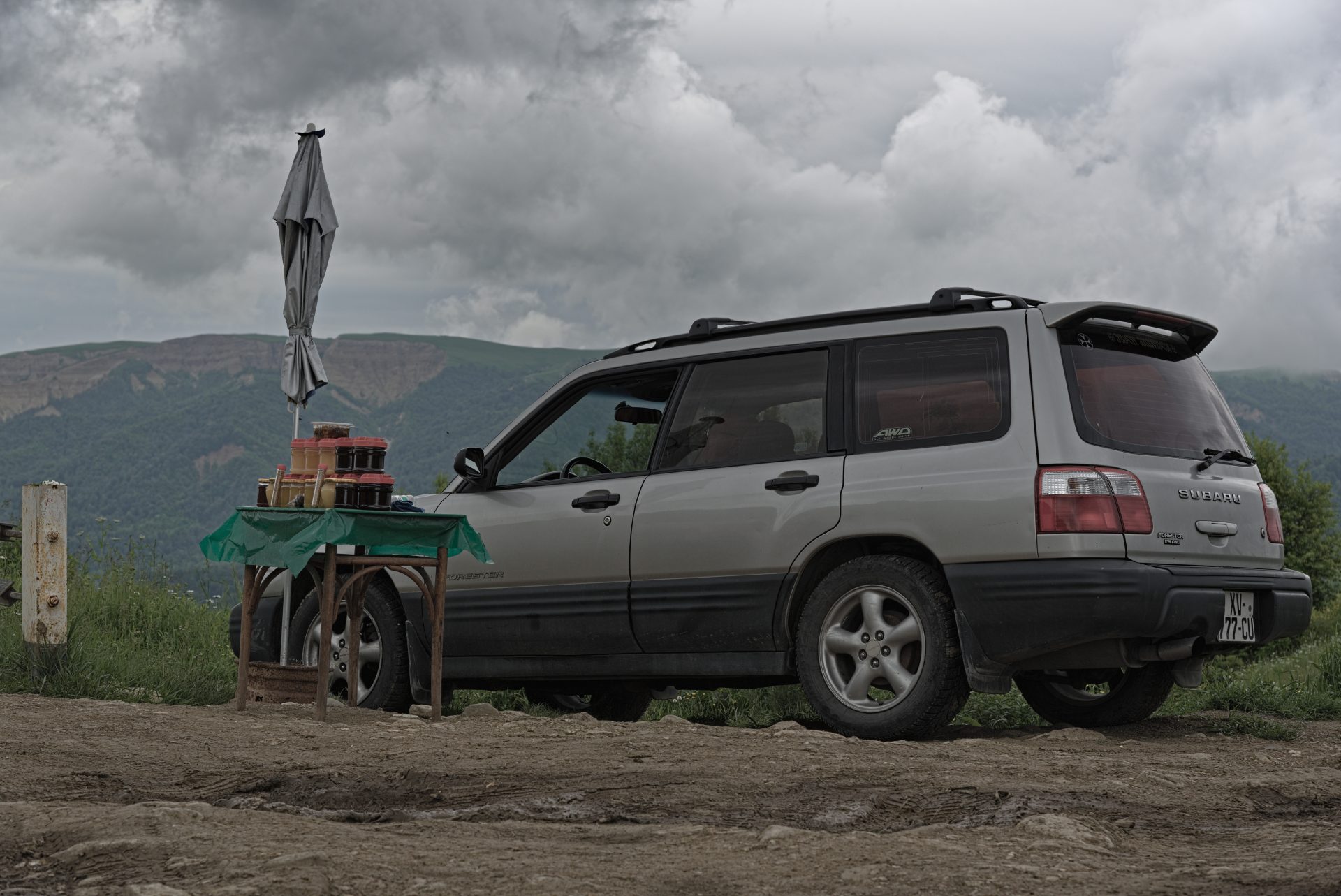 Human presence here consists of a regular succession of small villages and of a bizarrely high concentration of streetside honey vendors.

Honey is a staple of Georgian cuisine, and the multitude of beehives that populate these roadsides are a testament to the country’s agricultural wealth, which made it such an appealing target to its many foreign rulers over the centuries.

Georgia’s diverse climate means it is capable of growing pretty much any crop, from grains to Mediterranean fruits, tea and indeed, wine grapes. Archaeological evidence shows that wine has been produced here since at least 6,000 BCE. In fact, it’s believed that Georgia can rightfully claim ‘cradle of wine’ status.

Despite its vinous heritage, much of the wine produced in Georgia today is of rather unimpressive quality. It’s a legacy of its Soviet past. Much of this clean, inoffensive, often semi-sweet plonk is still imported and quaffed in vast quantities by its former ruler, but smaller amounts higher-grade, traditional ‘kvevri wine’ are made by a growing crowd of artisan producers.

Kvevris are popular across the entire country,

yet are particularly ubiquitous in Kakheti wine country.

Once buried underground in the cellar – the marani –
they are used as fermentation and wine storage containers.

The winemaking process involves treading the grapes in traditional satsnakheli wooden presses, then pouring the resulting juice alongside grape skins, stalks, and pips into the kvevri.

This is sealed and the wine left to ferment for about six months before it can be drawn off the solids and consumed. Most kvevri wine is made with white grapes. the liquid’s prolonged contact with the skins allows the transfer of phenolic compounds.

This results in the characteristic

Kvevri winemaking suffered from the former Soviet ruler’s repressive policies. Not only was kvevri wine production unsuitable for mass production, its strong identitary character was seen as a threat to Soviet homogeneity. The tables have turned over the last decade however. Georgians are increasingly championing their oenological traditions and kvevri’s worldwide popularity is growing, too, with winemakers claiming that the egg shape has a beneficial impact on wine’s maturation. Kvevris’ technical benefits are indeed scientifically sound, but there is a more profound, spiritual rationale to this ancient technique’s new-found glory.

Get TOPIA in your inbox – new features fortnightly

Zaza Kbilashvili’s workshop lies just a few miles to the west of Telavi, the main urban centre of Kakheti wine country. I reach it leaving behind the higher elevations of the Gombori Range and descending into the fertile Alazani Plain.

Kbilashvili’s kvevri-making heritage dates back generations. After Georgia’s independence in 1991, his family was one of only three remaining kvevri businesses that survived the seven decades of Russian occupation. In line with demand however, kvevri workshops have been proliferating of late, and Kbilashvili’s rare and precious expertise was instrumental in this shift. “The kvevri has to be sculptured as an egg, slowly, step by step,” he says. “I don’t use any measuring instruments, each kvevri is unique and they might differ in size from each other.”

Each kvevri is unique and they might differ in size from each other.

As he talks me through the making process, he never ceases to wear a graceful and understated smile. Admittedly, he must be pleased with his business. Kvevris are sold across the globe and his pieces are in extremely high demand. With several months needed to craft each single vessel, his waiting list gets longer by the day. Yet, there seems to be a rather more immaterial reason behind his intrinsic joy.

As his forefathers have been doing for generations, Kbilashvili creates keveris from the dust of the ground with a centuries-old, god-like expertise that’s almost biblical in nature. His kvevri aren’t mere vessels, they are his spiritual and cultural progeny: “The most exciting moment is when you take the facade off and see the finished kvevri inside,” he says, pointing at the kiln’s front wall. “To me, this moment is like the birth of a baby. The kiln is like a pregnant woman.”

After a short, 45-minute drive south from Kbilashvili’s workshop, in the village of Velistsikhe, I reach Vano Nareklishvili’s Qvevri Wine Cellar. The site is still a work in progress. Following 25 years as a travelling winemaker, Nareklishvili returned to his ancestral hometown and set up a brand new marani that champions traditional kvevri winemaking techniques boosted by decades of international experience.

“The kvevri is Georgia’s most important and best-known winemaking vessel, and it remains the centrepiece of traditional wine production,” he says, justifying his decision to go back to his roots. “Opening this marani is the fulfilment of my lifelong goal.”

Before construction works could begin, the marani’s naked site was blessed by the local priest. “This is to ensure it would lead to a successful business,” he clarifies. The marani will be subject to a further blessing on its inauguration day: “We will gather our closest relatives and friends and the priest will bless the cellar and our future work,” says Nareklishvili. “A Traditional Georgian supra [food feast] will be held, with celebratory toasts and prayers.”

Nareklishvili highlights that food will be accompanied by traditional polyphonic songs, notably Mravaljamieri. “My father perfectly performs folk songs,” he says proudly. Mravaljamieri is sung at a range of religious events, but it is overwhelmingly popular during celebratory wine occasions. The two things often collide anyway.

The lyrics of ‘Mravaljamieri (Forever More)’ show a strong nod to eternal life. By marking all key events within the winemaking calendar, the performance of this song reveals the degree to which Georgia’s egg-shaped terracotta vessels are closely interlinked with the very essence of human life itself.

Back in Tbilisi, I meet up with leading enologist and consultant winemaker Lado Uzunashvili to dig deeper into kvevris’ metaphysical dimension.

Uzunashvili believes that Georgian wine’s spiritual charge originated when winemaking first developed in the region. “Wine is intrinsically linked to the transition from hunting and gathering to a more ‘modern’ neolithic society,” he says, adding that it soon became central to the structural development of newly born human societies based on farming and agriculture. Eventually, kvevri wine came to define Georgians and their culture throughout their entire history, from their pagan days up until christianity. “If you follow the evolution of our beliefs,” Uzunashvili points out, “our religious calendars always coincided with key wine events,” as in the case of kvevri wine’s maturation period, which happens to regularly end around Easter time.

With such a celebratory overlap, the marani ended up serving as an alternative place of worship, “especially as Islam started to enter Georgia and Christians had to find alternative places for worship beyond churches,” says Uzunashvili. Maranis could be used to administer the seven sacraments, such as baptism, the holy orders, or marriage. “Traditionally, for each newborn, a new kvevri is filled and only opened at his or her wedding,” says Uzunashvili.

“This tradition tells you how kvevri wine was used to mark all the most important moments of human existence.”

Including death. Archaeological research shows that ‘kvevri graves’ were common throughout Georgia’s pagan antiquity, as the case of a kvevri burial place in Kaspi demonstrates – a small town 30 miles from Tbilisi dating back from the Hellenistic period (3rd/4th century BCE) .

“Not only do archaeologists know that wealthier Georgians were buried inside the kvevri, what is most interesting is that they were carefully placed there in a foetal position.” Like a woman’s womb, the egg-shaped kvevri has for Georgians the potential to generate new life, even in the face of death.

Nearly 3,000 miles from Tbilisi, London’s Peckham Cellars is renowned for both its incredible take on modern, seasonal British cuisine and for a delightfully curated wine offering. The selection features grapes and regions often missing from mainstream vinous maps, including a fair share of Georgian kvevri wine labels.

“Our guests tend to be highly-involved drinkers, meaning they come to us because of their interest in and knowledge of wine,” says chief cork popper Conor Strutt. “To them, quality goes without saying: the story of a wine and its production are just as important and can often be the deciding factor between two similar bottles.”

“Kvevri has an almost mystical aura within the world of wine. The fact that this method of production hasn’t changed in 8,000 years gives it a mythical status,” says Strutt. “Drinking kvevri wine is like tasting history. [It’s like] putting yourself in the shoes of someone from thousands of years ago. The world has changed so much and in so many ways but this method of making wine endures and is still being used today.”

The kvevri is Georgia’s traditional egg-shaped terracotta wine container. Its current popularity is understood as a mere winemaking trend, yet its growing worldwide appeal says more about our societal needs than meets the eye. It’s about our search for deeper meaning in the smallest things in life, like drinking a glass of wine. Travel to the “cradle of wine” to find out how the Georgian kvevri got spiritually charged.

Jacopo Mazzeo is a wine and drinks journalist, photographer, consultant, and former sommelier. He regularly contributes to leading trade and consumer publications including Wine Enthusiast, Whisky Magazine, Decanter, Club Oenologique, and Good Beer Hunting. Before embracing the drinks trade full-time, he got traumatised for life by nearly a decade of musicological studies and academic research. He still thinks that 13th-century music manuscripts look cool though. All about Jacopo’s work can be found on his website while his photography is @jacopomazzeophoto.