I’m standing barefoot and knee deep in
an indoor pond.

Radiant digital fish cut through the darkness with
bright hues of blue.

The fish navigate around me in every direction. I try to catch one with my hands.

It magically transforms into a blooming flower.

As the moments pass, the fish start to swim with more speed and urgency, leaving behind long light trails that paint the surface of the water in colourful circles.

Reality bends, lights blur and intensity calmly builds as I experience what’s best described as a digital acid trip. It’s hard to tell how long the peak lasted, but suddenly the fish regress to expected behaviour and the light trails fade gently into the black waters.

Drawing on the Water Surface Created by the Dance of Koi and People – Infinity – the verbose name for this mystical pond by Tokyo-based art collective teamLab – epitomises the current height of immersive art in what future history books might call a digital art renaissance. Plus, the movement continues to gain momentum with breakthroughs like non-fungible tokens (NFTs), generative adversarial networks (GANs), digital universes, and artificial intelligence.

Several creators are heating up the primeval fireball of digital art (a reference to the initial radiation era at the start of the Big Bang). But three innovators – teamLab, Refix Anadol, and Semiconductor – stand out as prime examples of the bold creativity and diversity that continues to take shape. Let’s start with the creators of the koi fish pond… 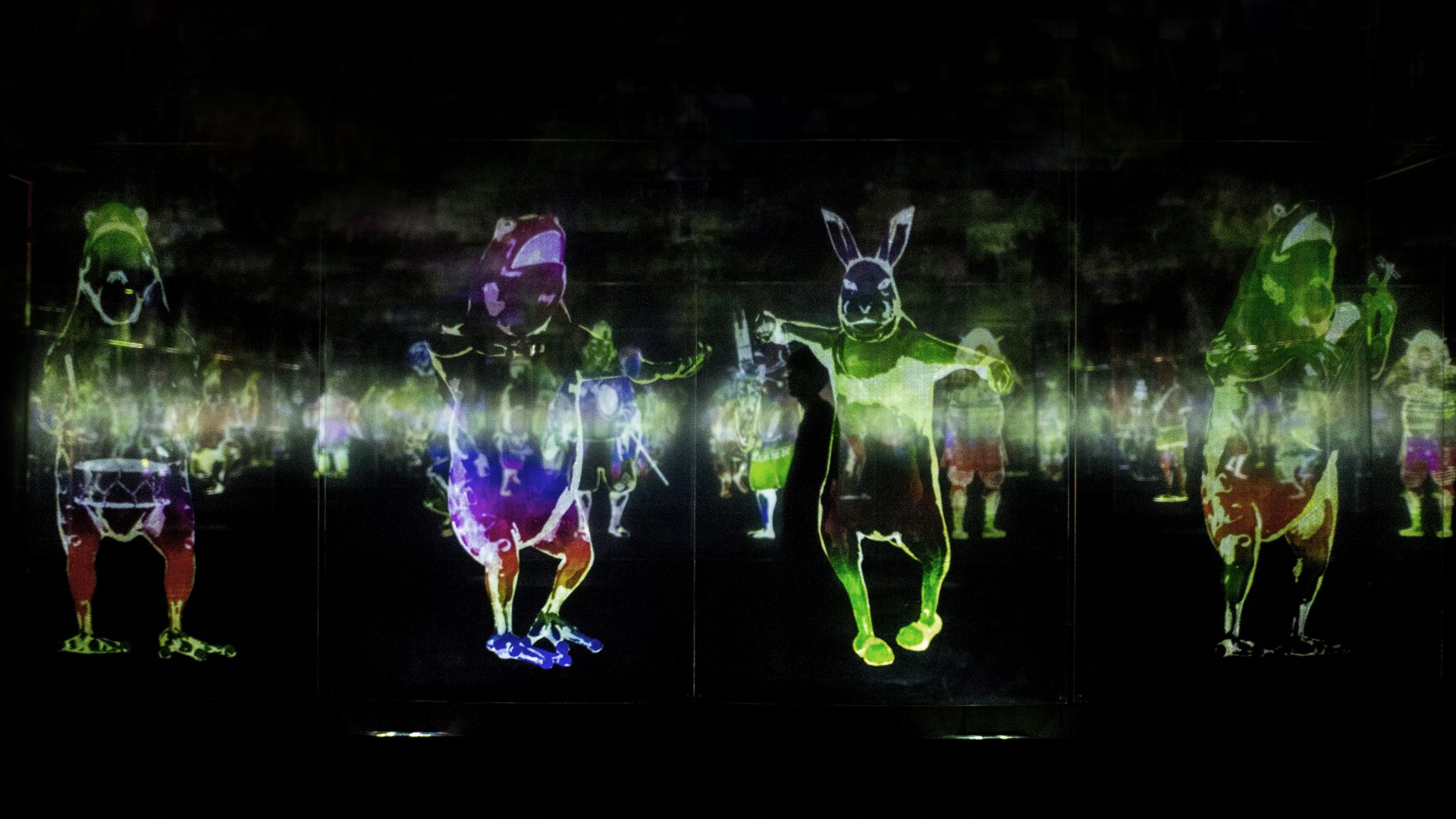 Founded in 2001, teamLab is a collective of digital artists, programmers, animators, designers, architects, and other self-described “ultra-technologists” whose early success came from making applications and websites, not digital art.

The corporate work financed teamLab’s visionary artistic side, and in the early years, the digital art lived in pop-up spaces rather than traditional galleries.

The company got its big break in 2011 when Takashi Murakami (a.k.a. the Japanese Warhol) invited the collective to display digital works at the Kaikai Kiki Gallery in Taipei, Taiwan, and Life Survives by the Power of Life stole the show and received more exhibition invites throughout Asia and Europe.

A decade later, teamLab creations can be found around the world, from the Venetian Macao and Marina Bay Sands (Singapore) hotels to the Asian Art Museum (San Francisco) and Grand Central Terminal (New York City). The collective created a beautiful digital forest in Fukuoka after having taken over a literal forest at the Takeo Hot Springs in southern Japan, and it’s currently the star of the group exhibit Superblue in Miami.

Still, it was with Planets that teamLab achieved international acclaim.

and a forest of lamps and mirrors.

Also located on a set of islands in Tokyo Bay. Borderless is a massive network of rooms where guests can imagine floating in space or relaxing in a multi-coloured waterfall. It opened in 2018 and finished its first year as the world’s most popular single-artist destination. More than two million people visited the site in its first year.

Planets and Borderless are scheduled to close in late 2022, presumably to make way for new grandiose experiences, and teamLab is aiming for a big splash in Europe in 2024 with a new carbon-neutral digital art museum in Hamburg, Germany. In the next year, teamLab will also open a light sculpture “shower” in China and a public “future city” installation in Shenzhen.

Yet the team still finds time for quirky projects like turning a vegan ramen shop into a full digital art experience. 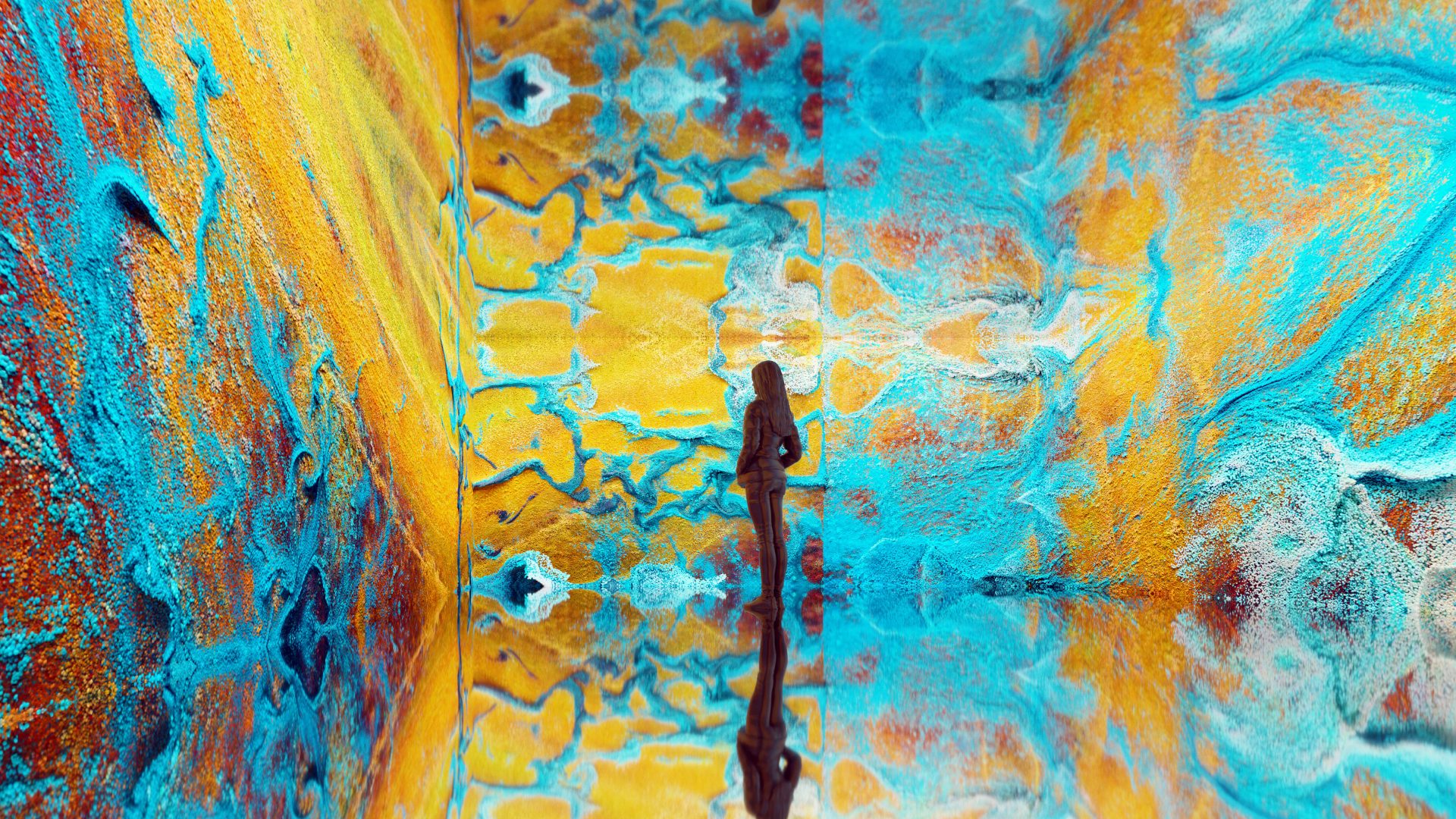 If teamLab is the leader in digital immersion, Istanbul-born Refik Anadol leads the artificial intelligence (AI) boom in the art world.

His team makes “machines more human” by creating living art out of everything from photos and music to Wi-Fi and cell signals. For example, he transformed 100 years of Los Angeles Philharmonic music into a grand artistic expression projected onto the Frank Gehry-designed Walt Disney Concert Hall.

“I was very fortunate to become an artist in residence at Google’s Artist and Machine Intelligence group focused on training artists to use AI algorithms working with one of the pioneers of AI engineering,” explains Anadol, who’s now based in Los Angeles. “After this massively inspirational experience, I didn’t stop using AI in my work, from letting a boiler room in New York dream to transforming an old power plant in Berlin into a dreaming machine. In this context, AI simply means a machine consciousness. I’m very interested in detaching ego from data. I am looking for how we can remember and dream together with collective memories.”

Anadol elaborates, “Imagine AI looking at a hundred million photos of New York. Machines can learn from this data and understand what is inside this image… the pattern, the colour, you name it. I am training AI to hallucinate, generate, synthesise what it learned. Of course, machines cannot create very realistic outputs, but it has an assumption. It has potentially accurate but not perfect results. I am painting with machine consciousness, machine decisions. I know it’s very abstract, but that’s what’s going on.”

Anadol designs large-scale immersive experiences, but he also creates wall-ready works for private collectors and public spaces. Like so many digital artists, he’s embraced the blockchain by tokenizing AI-generating art for consumer sale.

In November 2021, he partnered with Sotheby’s Hong Kong to auction his 8-piece Machine Hallucinations – Space: Metaverse NFT Collection, which utilised more than “two million raw images to create a visual exploration of space, a place where humans have yet travelled.”

The British duo, made up of hi-tech artists Ruth Jarman and Joe Gerhardt, created their work HALO using data on subatomic particle collisions collected by the ATLAS experiment at CERN, where particles collide at close to the speed of light. Scientists often describe the particle collisions as recreating conditions thought to have existed immediately after the Big Bang.

Geneva-based CERN (European Organization for Nuclear Research), which famously created the predecessor to the World Wide Web in 1980, operates the Large Hadron Collider, a 16-mile-long tube where superconducting magnets cause protons to crash into one another. Semiconductor participated in a residency at CERN in 2015, and the artists were apparently “the first to have received permission to work directly with raw data generated by the experiment.”

To reimagine the data as immersive art, Semiconductor created a 33-foot-long cylinder with hundreds of vertical piano strings stretching from floor to ceiling. With digital projectors and small hammers that strike the strings, HALO transforms the science into a 360-degree audiovisual installation that participants experience through multi-sensory immersion. According to reports, the experience prompted a few CERN scientists to shed tears of joy.

Mónica Bello, the Curator and Head of Arts at CERN, worked with Semiconductor on the project. Speaking with Artnet, she explained, “It allows you to dive into another reality. In a way, it’s a time machine… that confronts us with the paradox of time as a social construct. And that all of us have a very different idea of what time is.”

HALO is the duo’s best-known project, while other installations made the subatomic visible (Parting the Waves) and explored the evolution of landscapes through seismic data (Earthworks). Rolling with the post-Big Bang theme, the next installation reportedly involves data about the formation of planets.

These art collectives highlight the diversity and innovation of modern digital artists, but the movement includes many, many more participants.

For example, Barcelona-based Onionlab works at “the intersection of art, design and technology” with immersive projection mapping events, while the travelling Digital Museum of Digital Art (DiMoDa) highlights the growing prominence of virtual reality (VR).

NFTs, which rose to fame in crypto art, are now impacting music, film, sports and other industries, and they’ve helped artists monetise and secure their works by certifying ownership on the blockchain. AI-generated art first took off in 2018 when Paris-based collective Obvious sold The Portrait of Edmond Belamy for $432,500 at auction (far exceeding its $10,000 estimate), with artists like Sougwen Chung and Mario Klingemann showcasing other AI applications like drawing with robots.

Named after an expansive virtual world in the 1992 sci-fi novel Snow Crash, the metaverse is a collection of virtual worlds and augmented realities in a shared digital universe where people can work, play and socialise. Fortnite, Minecraft, The Sandbox, Animal Crossing and Roblox are virtual world games where participants held actual weddings and graduation ceremonies during the pandemic, while newer worlds like Decentraland, Cryptovoxels and Somnium Space reflect how the space has evolved beyond gaming.

Russian artist Maxim Zhestkov even creates works that he describes as “digital-born inhabitants of the metaverse”. A fully realised metaverse will require greater interconnectivity between the various worlds – and Silicon Valley is working hard toward this end.

The primeval fireball of digital art belongs in a world of good based on aesthetics and design, but it’s becoming great by developing its own culture and what will likely be a profound legacy. This is a historic Big Bang moment in the art world, and we’re fortunate enough to see it explode in real time.

David Jenison puts more stock in experiences than experience. That’s why, when he cut his teeth as a punk rock writer, he joined a band as it broke into the local mayor’s house to throw a party. “If the mayor has us arrested, he’ll never get reelected, so we’re fine,” said the guitarist with astute political savvy. From there, David explored chaotic creativity in food, travel, digital art, crypto and streetwear, from eating mezcal-soaked scorpions to spending a night in a Ukrainian jail to diving 600 metres underwater in a homemade submarine. The Los Angeles native now embraces life as a digital ronin who chases journeys over destinations, and side streets over highways. Follow him @DavidJenison.