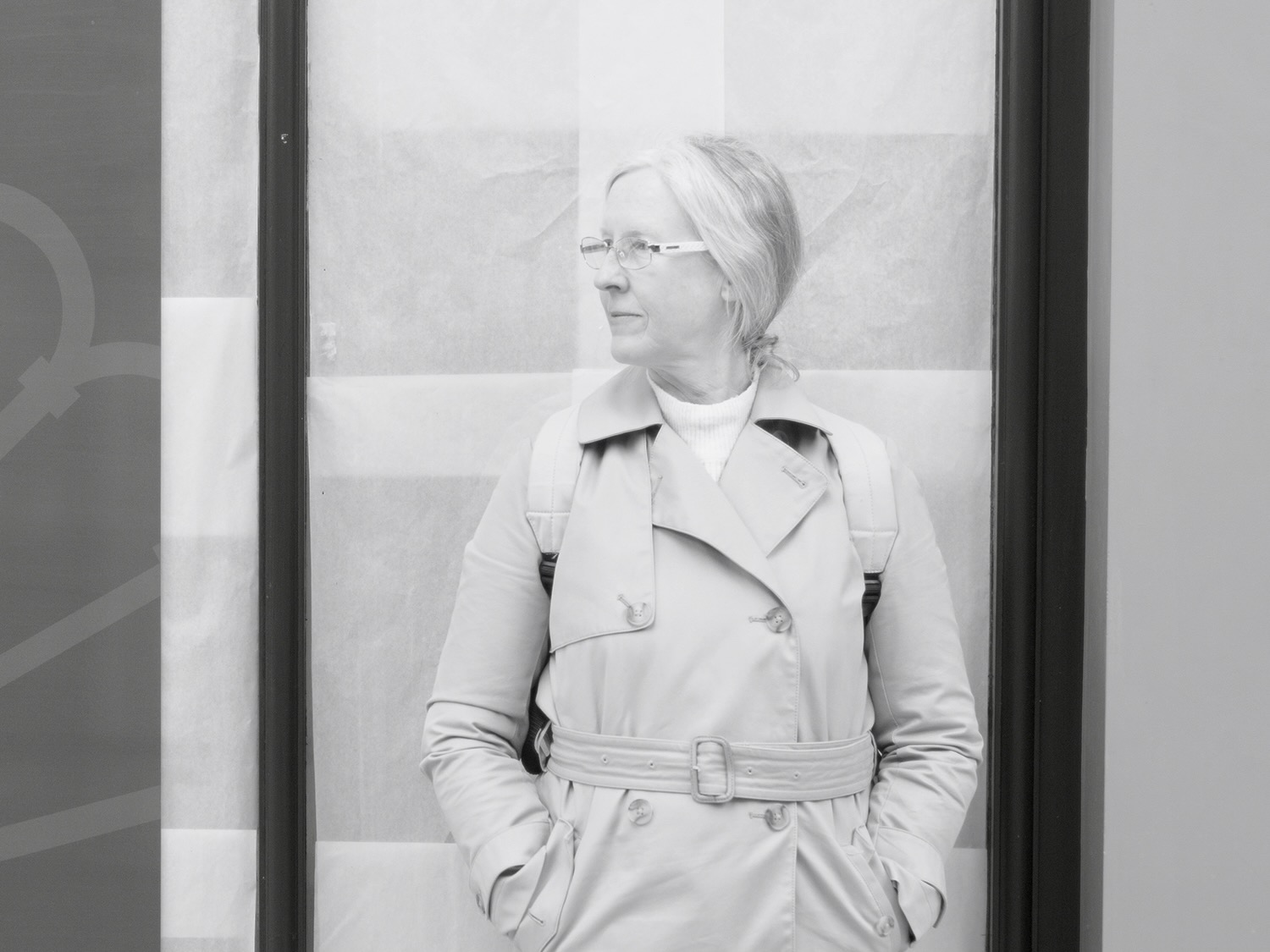 A middle-aged white woman misidentified in a white space is not a big deal, but what if you lost your head? Fiona Cullinan paints herself grey to shine a spotlight on surveillance and get us talking – and ‘weird walking’

Fiona Cullinan is a co-founder of Walkspace, a 36-strong collective of ‘weird walkers’.

Walkspace launched in the West Midlands, UK, in February 2020 – a time when anti-surveillance walks and playing with invisibility became Fiona’s lockdown jam. After discovering that facial recognition is based on picking up the markers of a face – eyebrows, eyes, nose, mouth – she started to play with the fact that when you are going grey, you can disappear entirely from the digital view of CCTV cameras.

Hi Fiona, firstly, what is it that you do?

‘Weird walking’ probably sums it up best. Exploring places playfully, with or without an agenda; walking to subvert city infrastructure; walking to experience and connect with a place more deeply.

What are Dazzle Walks and what have ships got to do with all this?

Dazzle Walks were created by The Dazzle Club in London to explore surveillance in our public spaces. The idea riffs off dazzle ships, which were painted in wartime with camouflage shapes to confuse enemy surveillance at sea. In 2019-2020, the Dazzle Club commissioned artists around the UK to lead walks in different cities, and the Birmingham Dazzle Walk was my first walking commission. Instead of painting our faces with camouflage to confuse watching cameras, we ‘beiged’ ourselves to take advantage of female invisibility in middle age. Facial recognition technology often doesn’t ‘see’ me. Even my passport application was rejected with the rather rude message: ‘Can’t find the outline of a head!”

Is there power in being invisible?

There is something seriously disempowering and excluding about the AI and machine systems we are building to run our society and ‘smart cities’. We have little control over how algorithm-based systems deal with us as humans. If the system says no, we can be locked out. But it is also powerful to be invisible in the modern world, where privacy means freedom from being watched and profiled. On the physical level, this is why night walks fascinate me. As a woman unseen, being able to move around the city at night on my own terms represents freedom. Freedom from being tracked online is much harder to achieve – as we are all being tracked, profiled, predicted and monetised, often without meaningful consent.

Even my passport application was rejected with the rather rude message: “Can’t find the outline of a head!”

Tell us something we don’t know about Birmingham.

Birmingham is an underrated UK city that’s exemplified by the phrase ‘Birmingham: It’s Not Shit’ – which was a successful blog by author-psychogeographer Jon Bounds that railed against its cliched bashing by the UK media. Brum gets a bad rap but Brummies love their city. Not because it’s ‘not shit’ but for the million reasons a place becomes home.

What are Crone Walks?

Conversations around Dazzle Walks led us to the flipside: Crone Walks. Female friends in their 40s and 50s were asking: how can a person be seen when they are invisible to society? How can we stake a place where older women are not traditionally welcome? And so we walked in areas from city underpasses to nightlife centres with the aim of writing ourselves into existence in those places. It was a group collaboration that involved dressing up as female stereotypes or alternative selves, wearing props and being photographed by a professional photographer as we processed through Birmingham’s centre. It was a performance-based walk with the aim of being seen.

What influenced you to do this?

Protest movements such as Reclaim the Night, where women march for the freedom to walk without the threat of violence against them, were an influence. But ‘Croning the City’ also gave us a chance to meet, talk and process some of the big changes happening in our lives from menopause. Entering into ‘crone’ age years can feel like a foreign land. Walking together with other peri-menopausal women felt like a positive way to navigate this new territory.

What did this action change?

Taking action is enlivening, expansive and emboldening. Often the pre and post-walk discussions are just as important as the walk, allowing people to connect and share experiences and ideas – whether that is about data privacy or navigating ageing. With Crone Walks, people looked at us, talked about us, even talked directly to us. We created a brief, fleeting spectacle in the lives of others. But the walk was always more about us as participants. The city hadn’t changed but our experience of it had during that one hour of walking together and being seen.

What role does play take in your walks?

The ideas behind my walks are generally quite serious or political but the walk itself is a joyful experience. Playing with face paint, dressing up, walking at night during a new moon, casting ‘spells’ by full moon, or just going off road to explore is fun. Activism is sort of baked into the Dazzle Walks but following an anti-surveillance walk with nearly 20 uni students, a common response was that it was quite serene and meditative. Walking in silence is a rarity perhaps, but it is precious and helps participants connect with the ideas more directly. My ‘playmates’ so far have been others in the Walkspace collective, friends, students and random, willing Brummies.

I’m very excited to be working with Jalan Gembira in Indonesia on a collaboration called Parallel Walking, supported by the British Council, in which we walk in parallel and show each other our cities. We’re walking, wading, singing, exhibiting, sharing and celebrating Indonesia’s hangout culture of nongkrong. We’ll be doing our best to share the Parallel Walking zine far and wide. Personally, my practice -– Dazzle Walks, Crone Walks and Female Safety Algorithms – seems driven by wider concerns about the machine-human balance in our society, how women walk and so on. I don’t think those are going away any time soon. I also have a secret postcard project going with a psychogeographer in Berlin where we respond to each other’s local neighbourhoods. And I’ve started doing one-off walk-based newsletters. Plus, I have an idea to walk my wrinkles by overlaying them on a local map and seeing where they take me!

I have an idea to walk my wrinkles by overlaying them on a local map and seeing where they take me!

Who is doing something inspiring that tweaks your antennae?

Craig Mod has been my main inspiration for walking. Based in Japan he goes on 500km long walks and you can walk with him virtually through newsletters, binaural recordings and video. He’s a journalist-poet and really brings places alive. There are lots of interesting Walkspace members. Three women to watch for me are: Daniella Turbin who is on a crazy mission to walk every square of the UK Ordnance Survey Maps; Megan Henebury, who is walking IN Birmingham’s River Rea from its source to the city; and …kruse, whose AutCRONE creation is wandering the climate changed land and sending encoded messages to humans from the future.

Lastly, how can readers add a bit of ‘psychogeography’ to their life?

Look for messages in the landscape. Find new words hiding in street names, road markings and other signage. What is your city trying to tell you?

— What’s ‘psychogeography’ when it’s at home?

Asking what is psychogeography is a bit like asking what is music. People have been doing it for hundreds of years and there are lots of different ways to do it. A term invented by Marxist theorist Guy Debord in 1955, psychogeography is essentially about exploration, about experiencing places in a different way, following a path or a gaze other than the one that’s prescribed or habitual. When artists take a sideways look at their cities, they encourage us to experience places in a deeper way and have conversations we would never have had before.

For a deep dive, explore situationism and the Spectacle with Debord, or the philosophical concept of rhizome with Deleuze and Guattari.

Hear from more artists who play with psychogeography here.

Fiona Cullinan’s work shows us that playing with and teasing our surveillance systems can be as powerful – and empowering – as any amount of rigorous research, analysis or protest. Walk over here (digitally) to learn more about her walking project and get involved.

Psychogeography has never seemed more relevant. In an increasingly apathetic society there is a need to revive the joys of discovery, play and self-empowerment.

How does the place you call home make you feel and behave? For a simple psychogeographic experience, take a walk in silence using a pack of playing cards to determine your route (red for right, black for left). Take pictures. Along the way you’ll encounter treasures hidden in plain sight, maybe some secrets of your neighbourhood and a heightened sensory experience…  guaranteed. WARNING! You may end up grinning madly while filling your phone with photos of weeds growing through cracks in the pavement.

Richard Byrne is a writer, educator and psychogeographer who wants to share the best stories that no one else is looking for. When he’s working you might find him @p_diversity. When he’s not working, he could be exploring the underworld with his kids on Minecraft or hanging out in Stardew Valley. Richard regularly spends an hour or two walking a very short distance while following psychogeographic instructions. He occasionally has euphoric experiences while walking and is trying to figure out how to have them more often.