How to hack a bus stop

A collective of international artists and activists is taking over public advertising spaces that primarily celebrate capitalism and consumption – the spaces that the public is forced to interact with, like when you’re waiting for a bus, or stuck in traffic 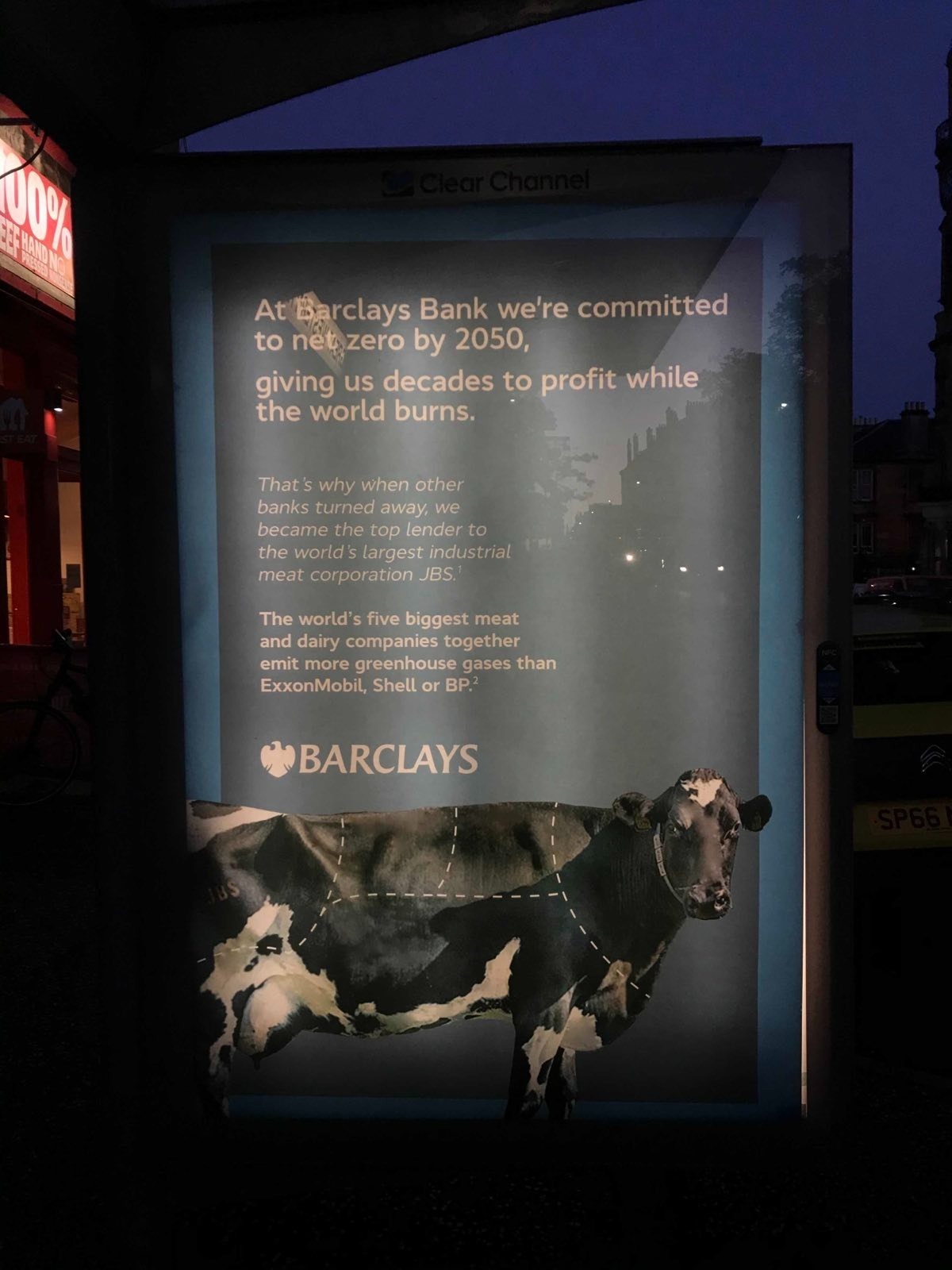 Brandalism is a revolt against the corporate
control of culture and space.

Brandalism has been holding corporate giants accountable for their greed, corruption and misuse of power since 2012. The subvertising collective started as an art project as a result of the dominance of corporate advertising messages in public spaces.

The use of ‘subvertising’ – a portmanteau of subvert and advertising – is aimed to provoke conversations about the legitimacy of outdoor advertising spaces and encourage passers-by to question the true motives of a brand.

Brandalism kickstarted its anti-consumption revolt against corporate control in July 2012. In five UK cities, 36 large format billboards received a Brandalism makeover, the original advertisements that these billboards held were replaced with artwork by more than 28 international artists. The artwork submitted and used addressed the interrelated impacts of advertising, such as body image, debt, cultural values, the environment and pollution.

Since then, Brandalism has taken its guerrilla activism projects globally, strategically timing takeovers to ensure they create the biggest impact.

Brandalism’s takeover in Paris happened the day before the 2015 COP21 climate talks began. Collaborating with over 100 Parisians and 80 artists from across the globe, Brandalism pasted 600 subvertisements in ad spaces across the city. These exposed the corporate greenwashing of large multinational polluters and their corporate lobbyists.

Thought-provoking artwork about the devastating impacts of bushfires and drought replaced 78 advertising spaces in Sydney, Melbourne and Brisbane.

And, in 2021, the UK got a Brandalism fix up. More than 200 billboards and bus stops were hacked with satirical spoof Barclays adverts, as climate campaigners increase pressure on the bank to stop funding the expansion of the fossil fuel industry. Dubbed ‘the dirtiest bank in Europe’, Barclays provides massive sums of money in support of major polluters.

Liverpool’s billboards and bus stops were also ‘hacked’ by Brandalism’s artists and activists, as part of a campaign to expose the dodgy banks of football. The campaign exposed Standard Chartered – Liverpool Football Club’s longest-running sponsor – for its financing of destructive fossil fuel projects in South-East Asia and controversial mining company Adaro.

The artwork was designed by four Liverpool artists and represents how the working-class game of football is being exploited by big businesses, drawing particular attention to Standard Chartered investments into destructive fossil fuel projects.

Brandalism successfully uses creative techniques to talk back to the corporate giants hiding poor environmental and social practices behind convincing advertising. Its global takeovers resonate with the people who are exposed to them but also challenges them to question the actions of the brands they buy into – a step closer to long-industrial change.​​

Most recently in May 2022, their spoof billboards in Manchester dish the dirt on (still) the dirtiest bank in Europe.

So, what’s next? Brandalism’s Tona Merriman said they want to collaborate with more like-minded people, like the Adfree Cities network. “This anti-advertising group in Lambeth, Bristol, Norwich, Leeds, Birmingham and Cardiff is doing great work organising at a local community level to stop new digital advertising screens from being installed in people’s neighbourhoods.”

She adds that Brandalism is also happy to offer any subvertising skillshares for those networks and any other progressive causes who want to speak back to the one-way dominance of corporate advertising.

We need people to question the status quo. Targeting advertising is about confronting a broken and outdated economic model of consumer capitalism. “By hacking, replacing or satirising adverts for McDonalds, SUVs, airlines, fast fashion or big banks, we’re calling for an overhaul of those power structures.”

Outdoor advertising is of course just one part of corporate power. “We need movements challenging their PR and lobbying efforts and their use of online platforms as well. But we’ve always seen public space as part of the urban commons. Who gets to put their messages up, which values are celebrated, what ideas are valued; these can all be contested,” she adds. The acquittal of the Colston Four statue topplers in Bristol demonstrated the importance of this.

“Will it be digital screen adverts for more plastic purchases, junk food and consumer status symbols? Or do we want to make space for community connection, mutual aid, nature, solidarity and public art?”

This fight, waged in all places,
on all networks and circuits of communication
is the responsibility of all who believe another world is possible.

This is our battle-cry, our semiotic war,
our rage against consumer mis-philosophy,
and the machines of predatory corporatism,
that block out the sun
burn our atmosphere

So imagine, if you will, another world
Emptied of mad empires,
Manufactured fears,
Paranoid dreams
and marauded lands.

Now imagine the sounds of those memories
crushing in your hands.

Instead of the facile dreams of consumer products and
the shadow festival
of fake-estate lifestyle choice,
pacifying with wealth those who remember,
smart-drugging the next generation of revolutionary minds.

We are people, not targets.

So we subvertise here for hope,
hope that is never too late to start.

Don’t hide in the shadows, steal their space,
their damaging words and aesthetics.

Instead of the facile dreams of consumer products and
the shadow festival
of fake-estate lifestyle choice,
pacifying with wealth those who remember,
smart-drugging the next generation of revolutionary minds.

We are people, not targets.

So we subvertise here for hope,
hope that is never too late to start.

Don’t hide in the shadows, steal their space,
their damaging words and aesthetics.

We take this space back to speak truth to power,
to oppression, to injustice,
against those that would have us give our lives,
our brightest years,
of all that we are and could be
to the serpent of consumption
perpetuating a world we don’t believe in
distracting us from each other in favour of ourselves,
destroying our ability to think and fantasise wildly.

We, who are you, have come to realise that
to dream is the beginning,
all that remains is action,
to reclaim the space to express.

And now learn from the masters…

By intervening into ad spaces that usually celebrate consumption, Brandalism uses ‘subvertising’ as a lens through which we can view the social and environmental injustices issues that capitalism creates.

Want to take action? Get involved.

Emma Jones is the photo editor and digital marketing lead for Ethos Magazine and publishing agency, Wordscape, which works with businesses across the social and circular economy to tell their stories and increase their impact. Emma is also studying for a Masters degree in Marketing at the University of Liverpool. Follow @ethos_mag.